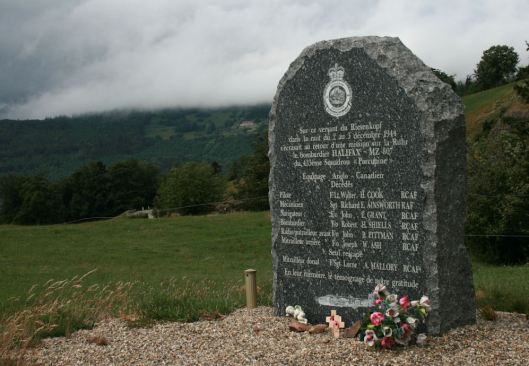 The end of a mission on the Ruhr. Alsace.

Imagine a dusty two-roomed village hall, the pride of the village, a village which has made wine since wolves roamed the land. Outside, a hand-drawn poster, sketches of zooming planes among fluffy clouds above vineyards, bombers looping through blue skies.

As if. But this is the commemoration activity of the veterans who guard the stories of sad villages obliterated in the push through the Vosges, and the one hundred and fifty thousand Alsaciens conscripted to fight for Germany against their country, so I’m tolerant.

Through the door, an elderly woman exhorts a visit to the museum proper, là, là, devant l’église. Maybe, maybe. Let’s see what is here. She hasn’t realised I’m British.

Stuffed away in battered contemporary chocolate boxes and sweet tins in a back bedroom I have tinloads of shrapnel, silk shards of parachutes, a twisted nosecone, slices of propellers, charred pieces of paper… memories given to me by now-old men who picked them up in the streets during the Manchester Blitz. This exhibition makes mine look like a biscuit tin for a dolls’ house. This is shrapnel collected by Goliath.

I am deeply uncomfortable and yet moved. I suppose that if a Me109 came down in my farmyard I might well hoard its engine till the war was over. But the Lancasters… I’ve always liked Lancasters (my dad built them; he couldn’t be a pilot, he couldn’t see enough). This is a hoard of a jigsaw of Lancasters – an aileron, a wing tip, an RR Merlin engine twisted and distorted by heat and metal fatigue, a propeller nose, and they all came down in the bombing raids on, say, Stuttgart (450, 500 Lancasters a night went out) and they all splintered apart in the sky over Alsace, and the pilots and crews drifted down as corpses attached to the parachutes stretched out over the ceiling of this village hall. Sometimes they were photographed lying there next to their combusted planes.

I look at the rivets, slightly askew, and I feel the welding, which is rough and bubbling – speed, I suppose. It’s a sign of human intervention. It could be the skilled work of someone I knew.  I feel the hotness of overflowing eyes and I feel stupidly embarrassed. They don’t know I’m a British person looking at the relics of British dead airmen. It’s easier to focus on the engine parts. It’s unemotional that way.

In the other room a BBC commentary has been weirdly and badly voiced over in French, and the film is a contemporary one about Italy in the war. Why Italy? was this all the film footage they could find? And the pictures carefully tacked to the walls are anything but British or American aircraft – a French pilot in front of his plane, from seven different angles. It’s bizarre. Is it assumed that the local population won’t know the difference; or is it an attempt to put a French gloss on the events? I can’t watch the film anyway, I get air-sick. I go back to pore over the silk maps – this one is Edinburgh to Hamburg – accompanied by humans’ flight logs in their neat handwriting, and the bits of uniforms pinned on to a shop mannequin faceless and bare in parts, and I think I’d rather not know their provenance.

Later that evening, there’s a march through the village I’m staying in. It’s a ramshackle bunch of soldiers with pennants and they don’t have a band, they sing. Occasionally. Just the odd phrase of Le ça ira. They’re followed by civic dignitaries clinking with grand gold chains, some clutching flags and accompanied by a scruffy contingent of police and a fire-fighter car and dogs. I ask someone what’s going on and he tells me that it’s the anniversary of the liberation of the village. Always remembered.

Lots to think about.