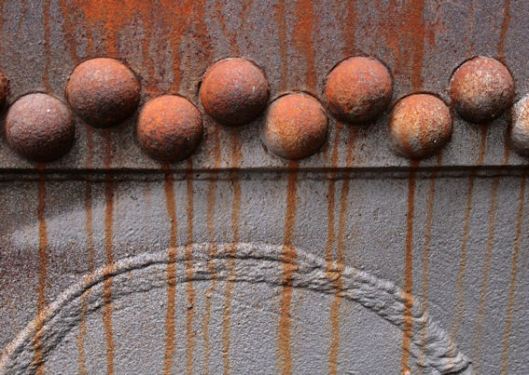 Time is folding down for the night when finally I am wheeled from the blood-spattered and damp-floored nightmare of the old women’s orthopaedic ward and along chill blasted corridors to the old women’s dying area. Five beds occupied by slumped humps of humanity or porcelain dolls with eyes staring at the air, and one empty bed: mine.

I haven’t got any shoes now. I ask the nurse to dispose of my blood-stained ones and she picks them up with her bare fingers and pops them in the open litter bin, then comes back. She hasn’t washed her hands. She’s quite kind and friendly, lets me hop barefooted to the shared bathroom, where I have to clean myself up while standing among the spatters of urine where old men have missed the toilet. There’s a soiled incontinence pad on the floor, next to the bin. It’s there for three days. And the soap dispenser is empty. It is never re-filled. I can’t wash my hands in the ward basin without moving the begonia which is kept in the sink. The staff rarely bother.

They want to dope me so I can sleep. I refuse. I know I’ll never sleep at ten o’clock at night, but I don’t trust them. Anyway, they’ll need to canulate me for the intravenous antibiotic infusion in an hour, so there’s no point in taking a sleeping pill only to wake up an hour later.

The room is fetid and rancid. It smells of doubly incontinent old women, and sweat, and body odours, and it’s hot, oppressively hot, and there’s no ventilation. Because of it, I am intolerably nauseous and agree to anti-emetics. Eventually, days later, the anti-emetics cease to be effective and I’m sick. The nurse shouts at me because I’ve been sick in the toilet. I have to use a cardboard bowl. They leave the cardboard bowls under my bed afterwards.  I have to eat, and have my visitors, and sleep, with bowls of dried up vomit under my bed. It isn’t the nurses’ job to move them, apparently and the auxiliaries won’t move them unless the nurses tell them to.

Eating’s academic anyway. They don’t do vegetarian food in this hospital, except once there were some carrots in a red sauce. My visitors bring me meals. And Domestos wipes. I can at least try to be scrupulously clean myself and take care of my own environment.

One night I really think I might suffocate;  I feel trapped under an oppressive sweltering eiderdown of bad smells and heat. I implore them for some ventilation. Immediately the answer is defensive: this is a hospital. We have the ventilation we are supposed to. So I keep on taking medicine to stop me throwing up, when some fresh air would have relieved me.

I’ve discovered why they want to dope me at night. I never sleep before about two anyway, in normal life, so I’m wide awake with my eyes half open, watching,  when the night staff do their final rounds. It’s a cacophony, because everyone knows, don’t they, that dying old women can’t hear. Ey, come here, just look what the eff she’s done now. Move yer effing arse Florence will yer. Come an give me an ‘and with this effin one. Look at this effin mess. Come an’ help me move this one. Pass us a effing towel, will yer… And they pop the incontinence pads in the open litter bin.

They’re supposed to escort Flo to the bathroom so she can be mobilised, but they can’t be bothered, so they wheel out a commode. She protests that she’s not supposed to use a commode, but they say she’s got to, and they force her to her feet and wrench away her nightclothes and push her down and she sits there sobbing till they come in and shriek at her, will you effin do something, Flo, and when she does, they tell her she’s worse than a effin animal.

She retaliates by hurling whatever she can at them – her shoes, her ornaments,  her flowers, crash, crash, crash. Curse, curse, curse. She cries herself to sleep.

I’m devastated and helpless, because I can’t intervene, which I would if I was mobile and not infantilised myself.

Then they go to bed. The staff, I mean. I can’t sleep, at all, any night, so I tend to get up and hop out of the ward and down the corridor to where there’s some air, and I just sit for hours on the corridor floor feeling the stimulating cold air, and crying. No-one misses me. The staff are asleep. I realise this at ten to seven one morning when someone comes down the corridor to the back door of the patients’ day room and knocks, and says it’s time to get up, and I hear beds being folded away. They haven’t seen me. I see them the next night wheeling in the expensive massaging beds which are for patients with mobility problems, and carrying in mattresses and bedding, and then going into the  patients’ day room and locking the door behind them. I even hear them snoring. My final day morning, the one on wake up duty turns round and sees me, wide awake, wide eyed and watching. Oh effing hell, she says, and disappears.

Eventually,  they send me home, with  tablets. Before I go, they give me back the medications which they took off me and say they’re going to give me three months supply to take with me. Why? I ask. I can afford prescriptions. Well, we just do, they say, and it’ll save you money. So they give me six little bottles of eye medications at £20 a bottle, and God knows how many antidepressants, certainly enough to kill myself several times over – whatever happened to good practice? – so they’re handing over about three hundred pounds worth of medications which I say I don’t want them to give me and which they’ve denied all along that I need. It’s mad, crazy, wasteful.

I had nightmares for weeks afterwards and was traumatised. I still can’t bear to go near that hospital, but fortunately I don’t need to. I have friends who are nurses in the NHS and they were absolutely appalled. One visited me; she was horrified. They were contravening so many clinical guidelines.

The thing is, I’m not aun undercover spy who was simply secretly observing and filming. I was seriously ill.

I would have swapped places with the primates in Chester Zoo any day.

(All this is true. I saw it all.  The names of the elderly patients have been changed.)